Our second morning in Manang dawned bright and clear – a hopeful sign for the road ahead. We were only two days from crossing the Throrong La pass; snow would be a potentially serious setback now. No worries – the day was soon warm and the layers were peeled away.

At 3,519 metres, Manang sits at twice the elevation of the Lake Louise, Alberta, the highest settlement in Canada. While our bodies were definitely acclimatizing, altitude decidedly affects athletic performance. The feeling is something like perpetually slogging through deep water; this would only grow more pronounced. Our first day’s goal was to reach Yak Kharka – a half day’s hiking and a gain of more than 500 metres. Bhagawati would decide over the next day whether we were managing well enough to push on to High Camp the next day, or remain overnight at Throrong Phedi for a bit more adjustment. The second scenario would mean a more gruelling climb to the pass, but perhaps a safer alternative. 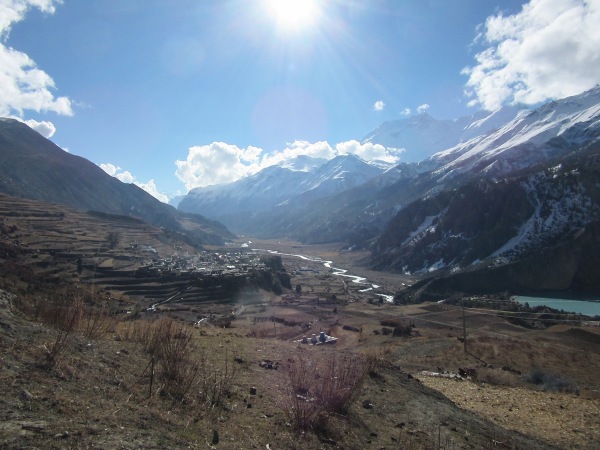 Looking back toward Manang

The trail swung away from the Marsyangdi River that had been our companion for so long, turning up the Jarsang Khola valley – so we still had a chattering, watery accompaniment below. Above, our journey was punctuated periodically by rumblings from the Gangapurna glacier as avalanches thundered down the distant slopes. We walked now in arid sub-alpine terrain, the slopes cloaked in autumn-coloured barberry shrubs, low spreading junipers and sparse alpine grasses. The climb was gentle but unrelenting and continually up.

We took our morning tea break on a roof top with an unobstructed view back toward Annapurna III and Gangapurna stretching across the mouth of the valley, splendid in the full sun. Time to catch our breath and soak in the light then back on the path, past a chorten stacked with exquisitely carved mani stones and on to our destination. 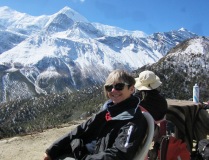 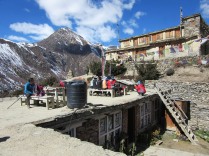 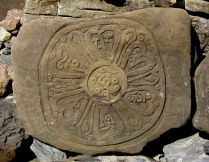 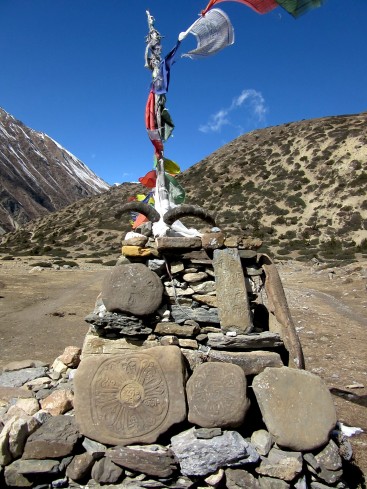 Until now, we’d seen relatively few other trekkers, considering we were traveling in peak season. Manang had been something of a gathering point, and we were definitely encountering more traffic. Fighting the altitude seemed to have levelled our own group’s disparate speeds and our porters, too, were slowing. On previous days we’d have ended up strung out over a fair distance; now we were traveling as more of a pack, resting together in little clumps and more frequently. I had more opportunity to chat with our ‘girls’ and learned that for several of them this was also their first time over the pass – and also the highest altitude that they had experienced. Bhagawati was not only monitoring our adjustment, but theirs as well – and the porters were carrying our baggage as an additional challenge. 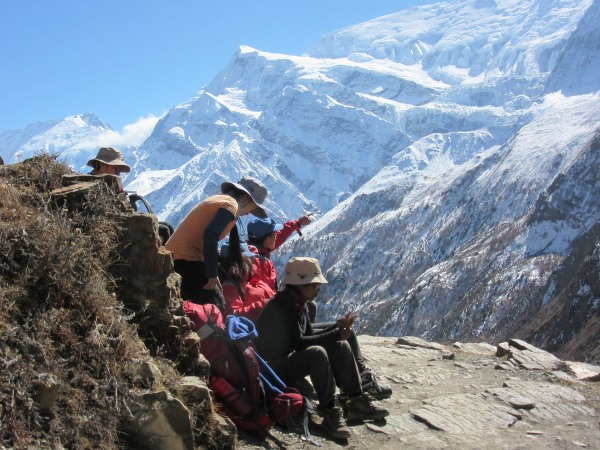 We reached the Himalayan View Hotel at Yak Kharka in time for lunch. The tea house offered an ambitious menu, and although Nepali pizza was credible, the moussaka was something of a stretch.

The recommended afternoon action was a short hike to a higher altitude, then back down for the night, but we staged a minor mutiny. Neil and I made personal health decisions to rest and nurse our virus. Ria very kindly offered me an Indonesian massage – a welcome addition to my recovery regimen, but sadly not as relaxing as we hoped because I coughed through the entire process. Then, blessedly, I slept – curled up in the afternoon sunshine streaming through my window. Nightfall brought us all together in the toasty warm dining hall. The porters gathered around a melodrama on the television; the rest of us huddled near the fireplace, variously occupied with journaling, reading, charging devices, treating water, drying socks and staying warm. Much of our conversation circled around our itinerary for the next days. None of us were having serious difficulty but there was an even distribution of early symptoms of AMS – mild headache, loss of appetite, nausea, sleeplessness – although it was hard to tell if these were also cold symptoms. No one was experiencing all of them, but nearly everyone had elected to take Diamox as a precaution. Ironically, while I was still recovering, I seemed mostly unaffected by altitude. Bhagawati was encouraging us to consider reaching for High Camp the next day and I think we were all anxious about gaining the extra altitude, which maybe accounted for our sleeplessness? In the end, we were in her hands; she would make the decision as our lead guide.

As pleasant as the day had been, nights were growing increasingly colder; the expanding thickness of the quilts at successive establishments testified to this. We left the warmth of the dining hall early to burrow under those ample quilts and await the next day’s decisions. Tucked up in my room with the requisite thermos of mint tea, I huddled by the window, tenting my sleeping bag around the steamy warmth. The stars – and later the moon – were spectacular. So many! So bright!